Continuing support for Women's Groups in Lawra District - Ghana, and for Orphans in Malawi 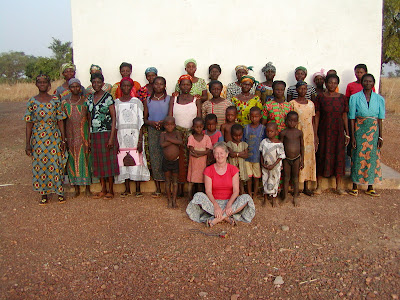 We arrived back in North Wales, in the UK, on September 27th 2009 at lunchtime; at 7.30pm on the same day we found ourselves rehearsing for a Vaudeville (Music Hall) with Ruthin Musical Theatre. We joined in with all sorts of crazy musical/theatrical/farcical deeds for the Vaudeville, which was performed in our local village hall in Llanfair DC and succeeded in raising £7,500 for local and overseas charities. £1950 of this was earmarked for African developments with which we were both partially and significantly associated.

£650 went to the Open Arms Orphanage in Malawi and £1300 was earmarked for continuing our support to credit union development with Women's Groups in the Lawra District of Ghana.

£650 has already been transferred to Lawra through the continuing involvement of Eric , our good friend who helped us set up the first Credit Union in the Lawra District with the Song Taa Group in Tuori village. Eric's last report, sent to us by e mail, in addition to several Skype to mobile conversations from the UK (Eric gets a better mobile signal than we get at home!) triggered the first £650 donation. The second £650 donation has also been transferred ready for the next village group; having had satisfactory feedback from Eric.

So far the money has been used to significant effect; enabling local women to manage, allocate, collect and re-allocate the money according to the needs of the different 'women's enterprise groups' at the time of the year when it is most needed. The initial Tuori group has now gone through a full (annual) cycle and the interest payments received have now increased the communal 'pot' by a further 50 cedis!

A further £130 was also sent out for the Tuori credit Union by a dedicated group of women craft enthusiasts in Ruthin; they held an Open Day and the proceeds of the day were donated to Song Taa.
Posted by Nigel and Jenny Horrocks at 3:15 pm No comments: